With November upon us, it was time for Country Threads BOM Sampler Blocks. 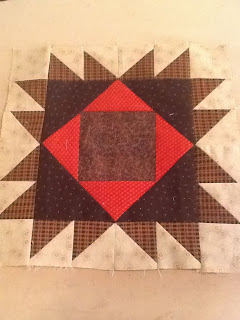 This one is 12 inches. They had recommended making them with the same fabric, but with my mission to use up scraps, I opted for similar, but not exact fabrics. The pattern posted on the first of November and I actually made them on the same day/night. Usually on Friday nights, I am exhausted, but as the mom taxi had to do a 10pm drop off and midnight pick up, I headed into my sewing room to stay occupied and these blocks were the outcome. 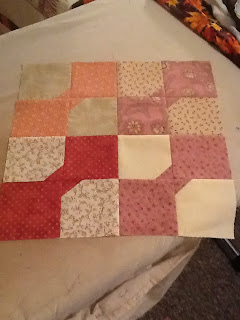 These blocks are for the joinedathip blog sampler. I made them earlier in the week all from scraps too. 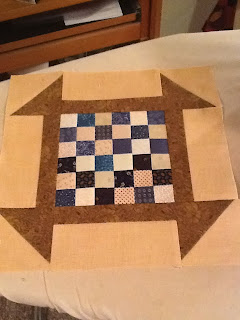 Today I hope to machine applique leaves on my scarecrow embroidery quilt, attach borders on it, and figure out a back. Should I piece one or just go over to Joann's with a trusty coupon and find one that will work?

I also checked out the Bee in My Bonnet Quilt Along, but I think I am going to pass as I have not finished my row along and I would like to get that done and to make some other projects featured in the book instead.

The Temecula Quilt Co. Quilt Along is pretty tempting though because I know it would make a dent in my scraps, but the drawback is it is a mystery and pretty tiny. I have so many UFOs, I really should not start another! What are you up to?

I love to receive comments and will do my best to reply to them. Thank you for taking the time to comment!!!

Tanya Quilts in CO
Quilter (26 years), teacher (25 years), & mother. I am a huge NFL fan and spend most Sundays sewing and watching football. I am a teacher, so summer is my big quilting season. I also love to read especially middle grade literature.