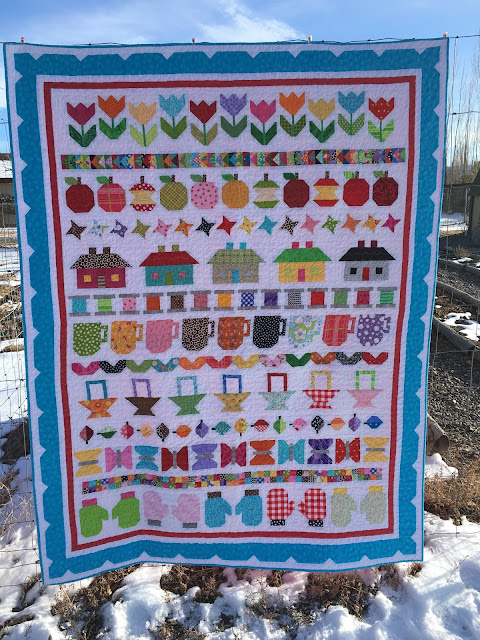 I finished my Bee In My Bonnet Row Along Quilt. This was my OMG for February. It was a UFO from July 2013.
http://www.elmstreetquilts.com/2018/02/one-monthly-goal-february-finish-link-up.html
I finally took the plunge and decided on my borders--a thinner version of the outer pieced border on Lori Holt's design. I made mine a finished three inch instead of six inches. Mine is 58 x 72 inches! 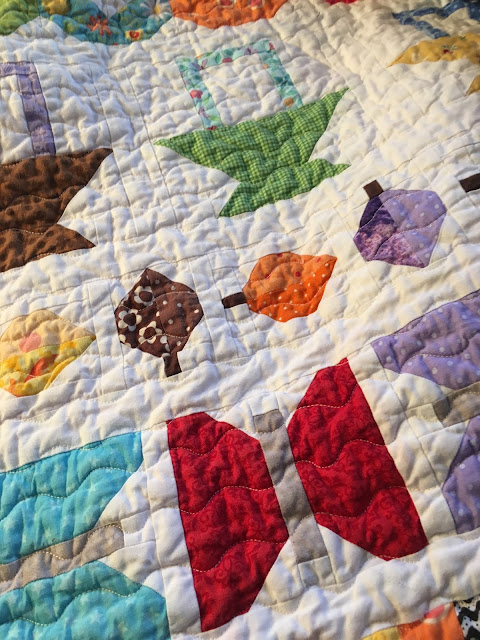 The backstory on this quilt is I started it soon after I started blogging in 2013. I had gotten frustrated with a lack of modern quilting in my local area and I turned to the internet and blogs to inspire me. I discovered Lori Holt's Bee In My Bonnet blog. At that time this was a still available on her blog as a series of tutorials. I competed all of the rows in a couple of weeks and organized all of my scraps by color--the modern scrappy style has become my favorite. 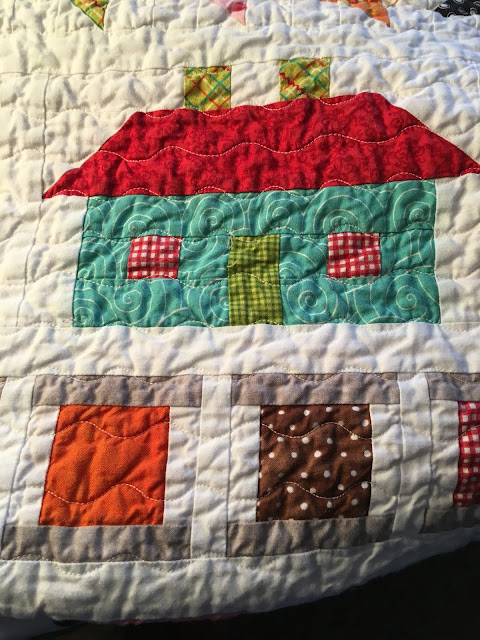 Then, I hit a wall and could not make a decision about borders. It languished in a plastic tub for several years. I even taught a BOM class for this quilt in 2016, but did not finish my own. 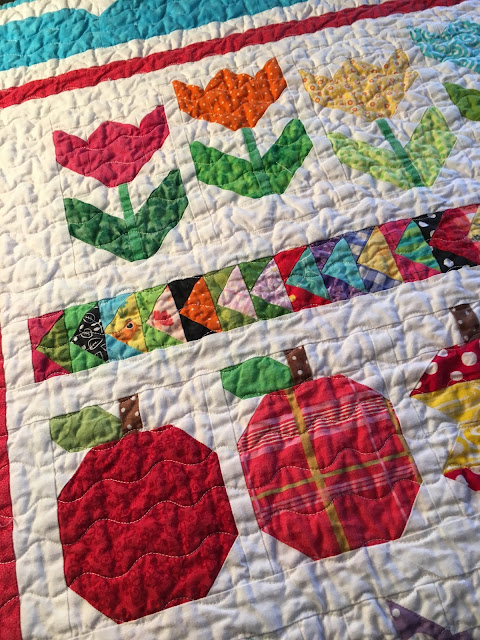 I did buy a turquoise fabric with the borders in mind and I picked up a red fabric for the backing. 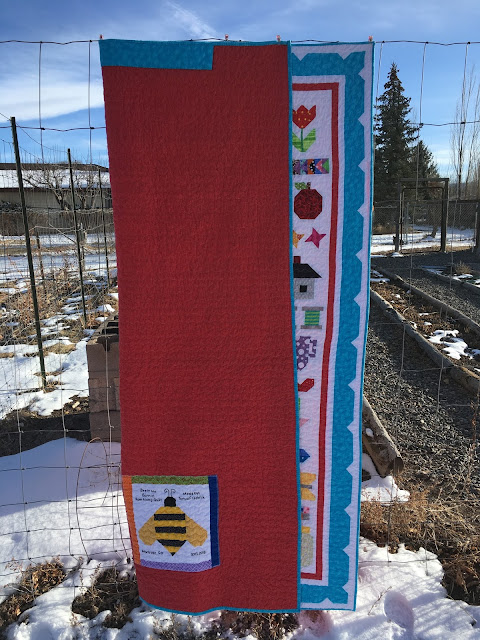 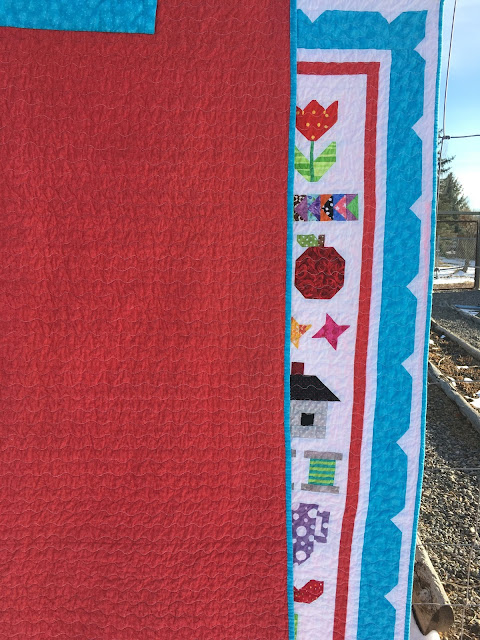 I ended up soaking the quilt in a very hot bubble bath of half a cup of Dawn Clear Dish Soap for over 12 hours.  It seemed to do the trick and I washed it again with several Color Catchers and they came out white. Success-into the dryer it went! 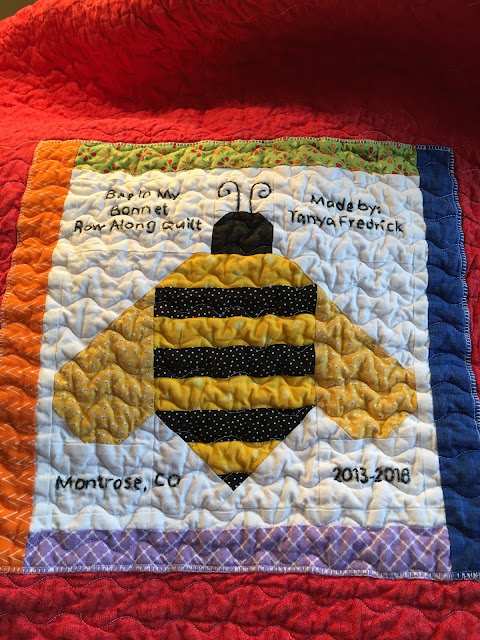 Here is an up close of my label and the quilting. I struggled with how to quilt it. I wish I could afford to have my quilts professionally quilted, but that is not in my budget and long arming it myself is usually not very successful. I decided to embrace the motto- Done Is Better Than Perfect and quilt it horizontally with my Pfaff's large wavy stitch an inch apart. Since the focus is on the blocks themselves, I think the quilting actually works really well. 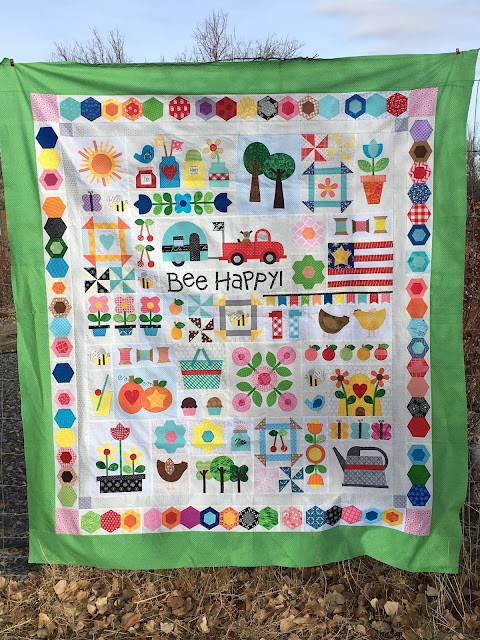 I may even get my Bee Happy Appliqué Quilt prepped to quilt it this way. What do you think? This one needs to be finished too. #ufoslayer 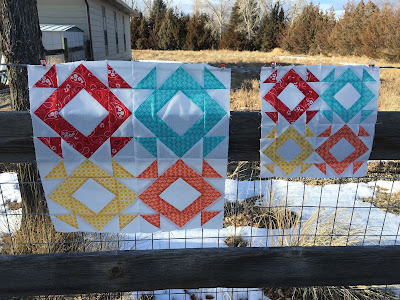 I have also been keeping up with the Clementine Quilt Along--here are my Blocks for February. This quilt is going to be spectacular! You can find the block directions here and don't forget this is a fundraiser for St. Jude!
https://blog.fatquartershop.com/clementine-quilt-along.html

I am still working on binding for my friend and that will be my Slow Sunday Stitching
https://kathysquilts.blogspot.ca/2018/02/slow-sunday-stitching_25.html 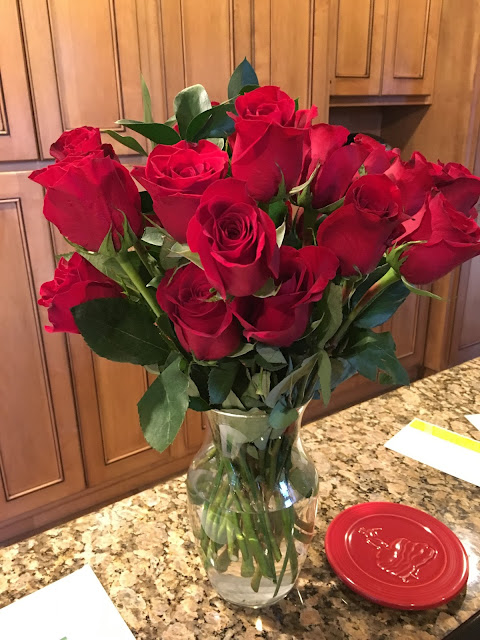 I hope you had a lovely Valentine's Day! My hubby and I don't make a big deal about it--we usually celebrate with a steak dinner and nice bottle of wine, but my amazing daughter sent me these two dozen roses. They still look lovely and smell even better nearly a week later! 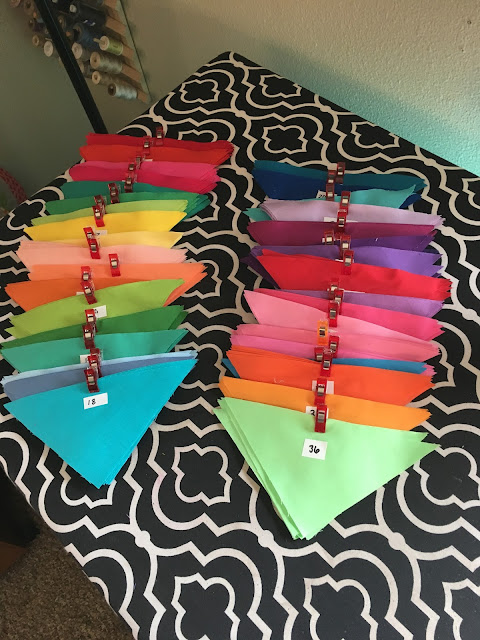 I caved a couple of weeks ago and ordered a kit to participate in the Postcard from Sweden Quilt Along. It officially began on Valentine's Day, but I worked on it this weekend. It takes a lot of time to cut up 36 fat quarters and number them, but they look so bright and cheerful. 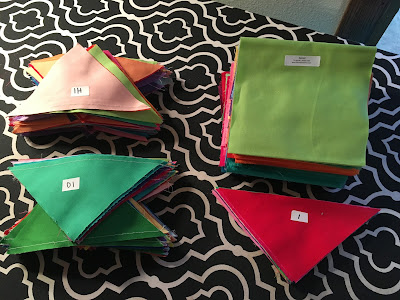 I spent today sewing all the blocks for the rows together. I still need to trim the blocks, but I am a little ahead now. I know the trimming will be tedious, but it will be worth it. I am making the larger sized quilt that will finish 60 x 72 inches. 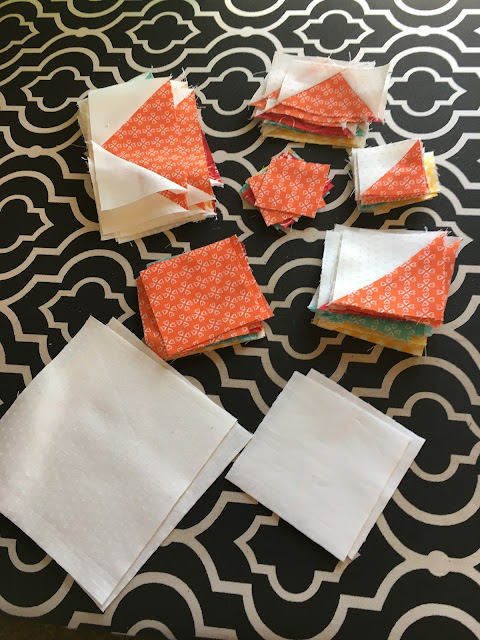 I also worked on Blocks 2 for the Clementine Quilt Along, but I cannot reveal them yet! For information on both quilt alongs, check my right hand sidebar for links. 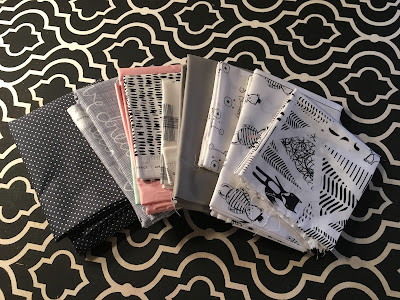 I have a another secret sewing project for the Fat Quarter Shop, so stay tuned for that.

By the way, my spa treatment soaking of my Row Along Quilt worked, so that UFO is officially completed. I hope our wind dies down soon, so I can get some pictures of fabulous it came out.
#ufoslayer 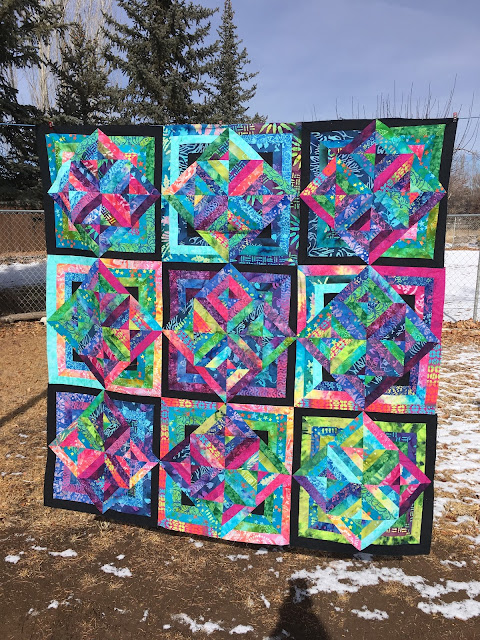 I have officially been a quilter for 23 years and sadly I have still not finished my first quilt and likely never will! I spent some time yesterday assessing my UFO projects--I was looking at the six tops I had stored in my hope chest and my hubby kindly reminded me there was also a tub of UFOs out in the garage too...Into the garage, I ventured. Sure enough, the tub contained my first quilt, another scrappy quilt, and this batik beauty.

This UFO is ancient---likely 15+ years old. I know I made it when I lived in California and I still have the pattern which was from 2000. It is called Bouillabaisse and can still be purchased here:
http://pieintheskyquilts.com/index.php/product/bouillabaise/
I went through a batik phase. Batiks are striking and gorgeous looking, but they are not soft which is why I stopped using them. In its current state, this quilt is roughly 57 inches square. I could add a border, but I am not sure. I located several yards of an aqua batik that could be a backing--again I am not sold. Well, I ironed it and its potential backing and hung it in the closet to ponder. I may use it as a charity quilt for Happy Chemo as the Hands 2 Help 2018 will be coming very soon. At least it has been unearthed and won't continue to languish and unlike my first quilt I like the colors although it is far from perfect. 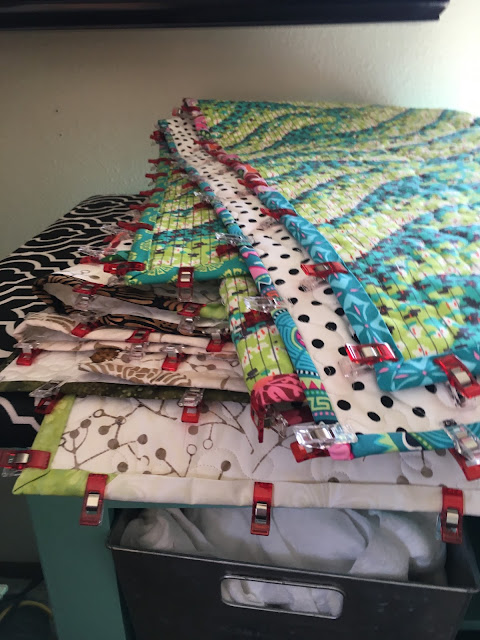 I dropped two queen-sized quilts off to my friend Rachel yesterday--I hand bound them for her. We are planning on trading my hand binding for her longarm quilting. She is currently in the market to purchase a longarm and had been trying out several types around town. Unfortunately, she broke her arm and had to have surgery which may delay her longarm adventures a little, but I am in no hurry when so many of my tops have been waiting years. I went ahead and took these lap sized quilts to bind for her. I can cuddle up under them and stitch while I watch the Olympics in the evenings. I will work on the batik one for Slow Sunday Stitching:
https://kathysquilts.blogspot.ca/2018/02/slow-sunday-stitching_11.html 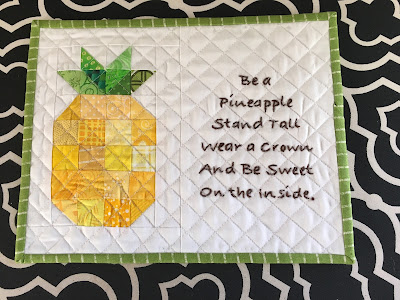 I finished this little mug rug the other night--it was a UFO from last spring.

My Row Along Quilt is all done, but I had a little problem with some bleeding in one area, so it is having a long spa day in my bathtub with some Dawn dish soap right now. I can live with it, if it does not come out, because I am probably the only one that would notice the bleeding along some of the quilted lines by my label...Done is better than perfect!
#ufoslayer 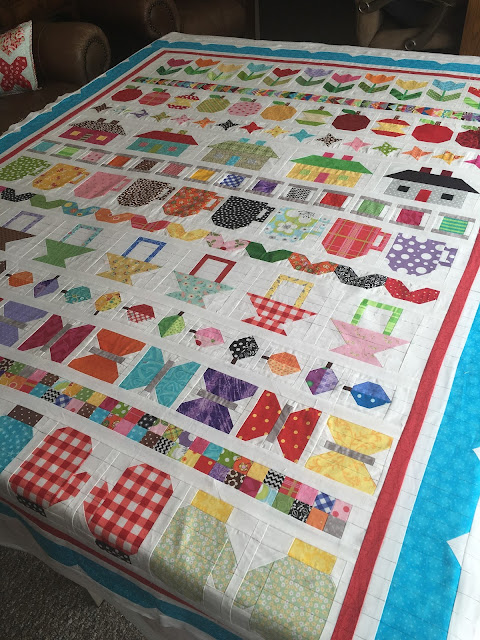 February is a shorter month, so I was a little hesitant to make a major goal for my One Monthly Goal (OMG). However, this UFO has been lingering far too long--it is my Row Along Quilt that I pieced way back in July 2013. I got it out after Xmas and got the borders on last month, embroidered my label, and pieced my backing which leaves quilting and binding.
http://www.elmstreetquilts.com/2018/02/one-monthly-goal-february-goal-setting.html

I got it pinned this afternoon and started on the quilting. I hope to get the quilting done between tonight and tomorrow morning, so I can work on binding it during the Super Bowl for Slow Sunday Stitching: https://kathysquilts.blogspot.ca

We are not that enthusiastic about the Super Bowl, but we will be rooting for the Eagles and I am making Philly Cheesesteaks in the crock pot with some other goodies. At least we can rely on the commercials and Justin Timberlake to entertain us while I work on my binding!

Tanya Quilts in CO
Quilter (26 years), teacher (25 years), & mother. I am a huge NFL fan and spend most Sundays sewing and watching football. I am a teacher, so summer is my big quilting season. I also love to read especially middle grade literature.